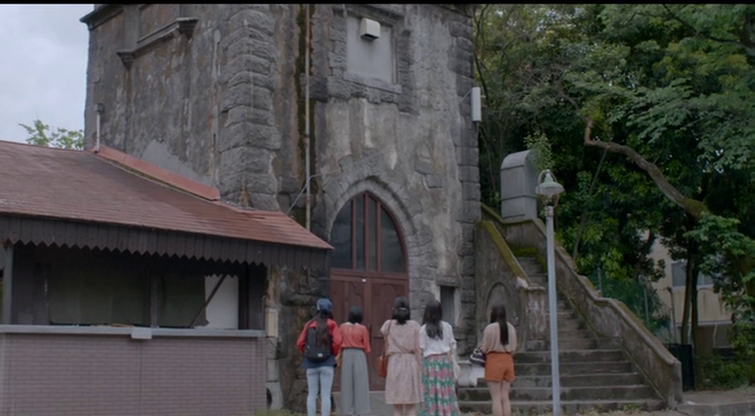 The movies starts with a group of urban explorers investigating the rumor of the haunted house at Toshimaen theme park. It is said that a curse befalls you if you knock on the door three times. Those urban explorers are never seen again.

Meanwhile, Saki (Rie Kitahara) is due to leave Japan for her studies. For her farewell party she and her high school friends are invited to the Toshimaen theme park. As fate would have it, that’s exactly where their classmate Yuka (Arisa Komiya) disappeared without a trace some years ago. Upon arriving at the park, of course the friends end up at said haunted house, and of course it doesn’t take long until they fall victim to the curse one by one. Saki and her remaining friends decide to stay and search for the rest. Not only do they not get kicked out after dark, they soon find themselves actually unable to leave the place, as a chasm has suddenly opened up by the exit. While searching for another way out, the remaining friends are chased by Yuka’s vengeful spirit.

Toshimaen is an actual theme park in Tokyo that was closed down recently, in 2020. One of the oldest theme parks in Japan, it was in operation since 1926. Not surprisingly, it had its share of rumors and urban legends. One of them revolves around the haunted house attraction, which is apparently really haunted. The movie was obviously shot at the actual location, and expands upon the rumors around it. I actually love horror movies set at theme parks, they should make way more of those. Final Destination 3 comes to mind. Unfortunately, this one is more of a merry-go-round than a roller coaster. There is nothing even remotely scare here, it’s kinda like any other theme park. You know it’s just trickery. Toshimaen follows the recent trend of light horror, with former idols in the lead (in this care Rie Kitahara, formerly of AKB48). None of the cast are particularly memorable, but I can’t blame the actresses for that. They are doing their best. The script never gives us a chance to care for the characters as they get picked off one by one. There is nothing inherently wrong with the movie. It’s fine technically, just unambitious, predictable and lame from start to finish. If this was a school paper, I’d give it a C for lack of effort.

Average movie across the board.