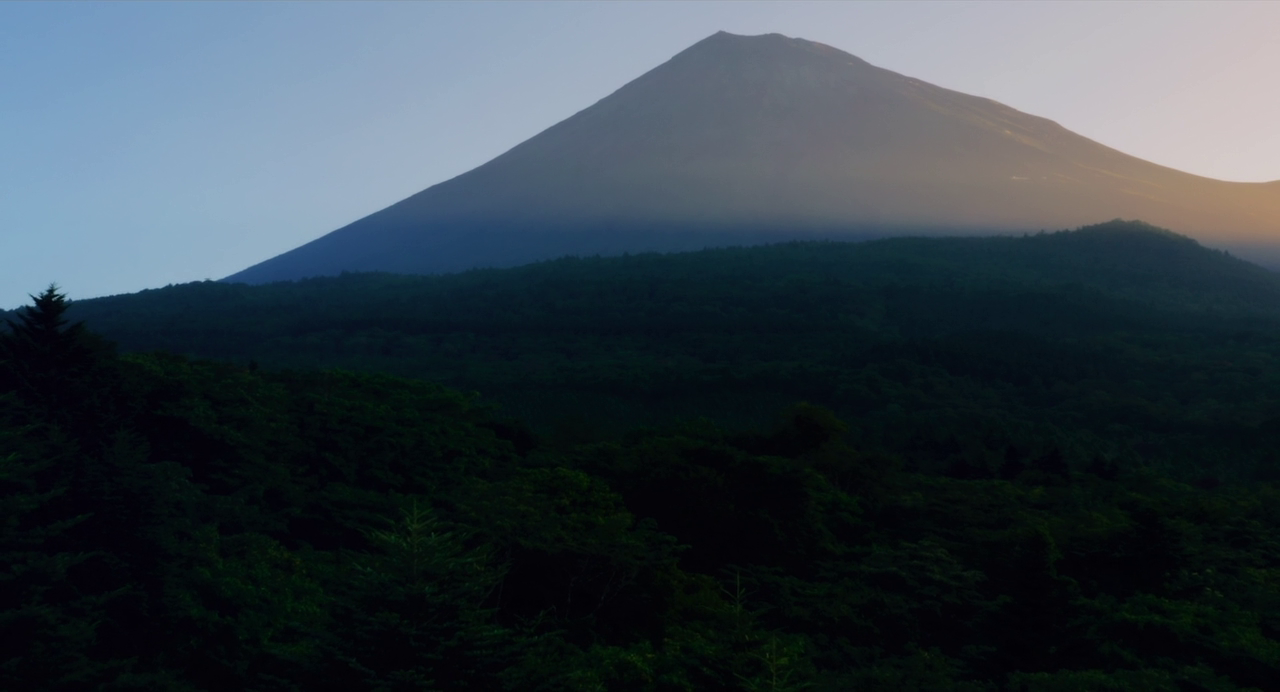 Jukai Village is supposedly hidden inside the famous “suicide forest” of Aokigahara nearby Mt. Fuji, “jukai” (literally “sea of trees”) being another name for the place. It’s said that whoever ventures in too deep will never be able to leave again.

There are three different plot lines that vaguely look like this:

1. Sisters Mei and Hibiki help their friend move into a house on the outskirts of the forest, when a mysterious box appears. When they open it, the friends unleash the curse of the forest and misfortune starts happening. After a failed attempt to exorcise the box, they venture into the forest to search for one of their friends.

2. The forest seems to be calling Hibiki, just like her mother years ago. She joins a group of occult friends to search for a youtuber who disappeared inside the forest during a live stream. Mei decides to take the box back into the forest to break the curse.

3. Young Mei and Hibiki are found near the forest by local resident Mr. Iguchi after they just lost their mother. It seems like the forest and the mysterious village inside had something to do with it.

This is the second entry in Takashi Shimizu’s “folk horror” trilogy and follows a similar pattern to the first one, Howling Village. Not only is Shimizu’s signature style very much visible, this is also his most confusing story to date.

Don’t worry if you didn’t quite understand my above synopsis. It’s really hard, if not impossible, to properly summarize the plot of Suicide Forest Village. It suffers from similar problems as its predecessor, only worse. Again, the story is kinda hard to follow and presented somewhat devoid of emotion. Simply speaking, there is no central mystery or anything to carry the plot. Things sort of happen, but we only learn why after the fact. As a result, there is nothing here to make us curious. We don’t know how the curse works or what we’re supposed to be afraid of. Strangely enough, the titular village doesn’t really make an appearance in the movie, nor does it play a major part. Instead, the plot decides to focus on the cursed box that contains all the wrath of the people who died inside the forest (or something like that). What’s more, the movie completely ignores the real life rumors and phenomena, and deaths are presented simply as a direct result of the curse. IMHO the “suicide forest” as a setting had more potential for a horror movie.

Probably the biggest problem here are the different timelines. I already knew Shimizu’s penchant for confusing plots, but he has really outdone himself here. There are about three different plots happening at different times, and more characters than I could keep track of. If it was me, I would start with a mystery, pose a question and later answer it in a shocking reveal. But not here. The way events are presented makes it impossible to draw a connection between them, or understand what order they happened in. Honestly, 75% of the time I didn’t understand what was going on. The plots do sort of come together at the end, but the emotion was lost somewhere along the way. It also doesn’t help that none of the characters are particularly likeable or easy to root for. Their morose behavior also gives the whole thing a somewhat depressing feel.

If neither the story nor the characters are very interesting, the least you could ask for are some decent scares, right? How does Suicide Forest Village fare in that regard? Well, similarly to Howling Village, since we don’t know what’s at stake or what the threat is, naturally there isn’t much suspense. It doesn’t help that the curse is never really explained, and deaths just happen for one reason or another. However we do get to see some bizarre and sometimes shocking imagery, such as cut-off fingers or dead bodies enveloped by trees. I’d actually say those visuals are pretty original and one of the movie’s high points. Some of those scenes are actually very unique and effective, but they are too far and few between. At least they saved the best for last here, you may look forward to the showdown. Anyway, I suppose the whole thing was supposed to be more of a paranormal mystery (kinda like Howling Village) than horror, but there is really very little here to keep the momentum.

What else can I say? Is Suicide Forest Village enjoyable? There is no definitive answer to that. At almost 2 hours, the movie is definitely way too long and my concentration started to falter around mid-point. If I was rating the weirdness of movies, this would get 10 out of 10 points. But as it is, I can’t wholeheartedly recommend it. It’s not Shimizu’s best work, but if you’re a fan of his and / or Japanese folk horror, you might want to check it out before we get to see part three.

Story is all over the place.